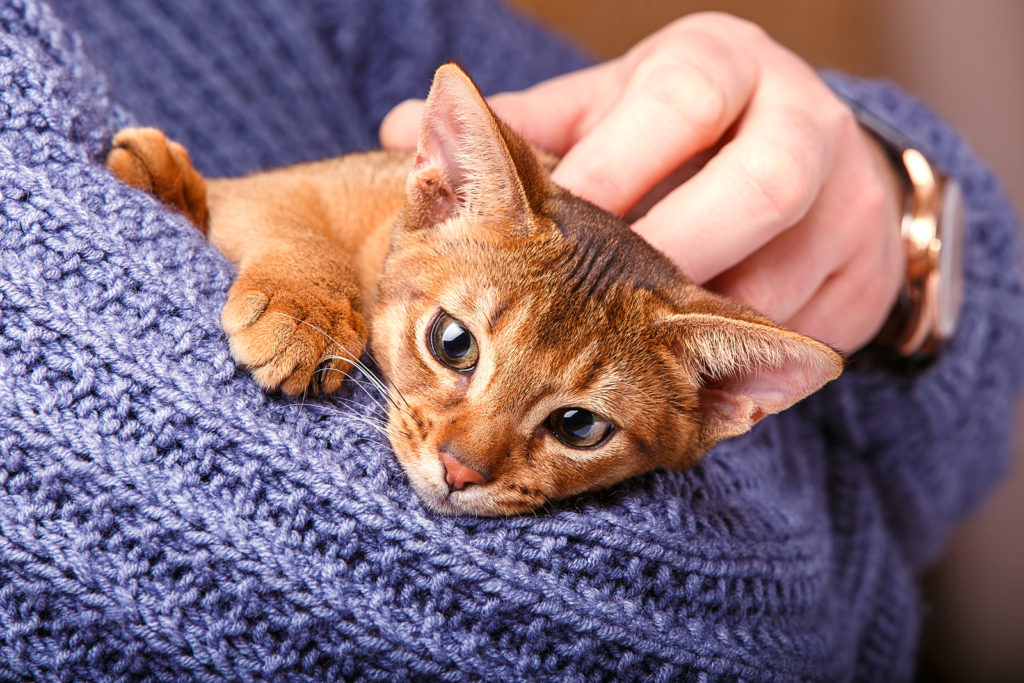 Morag McArthur Richardson: Loyalty and intelligence are the best traits.

Debbie Poulsen Ellwood: Zest for life, intelligence and how engaged they are with humans. 🙂

Debra Koch Scharf: They are SO incredibly smart!

Lauren Young: I’m starting to think mine might have a screw loose, everyone saying how smart they are!

James Jytte Simmons: One more vote for intelligence ! Also their athletic play, interest in their people’s dinner and attatchment to their people

Peggy Cleary: There is no such thing as gravity

Susan Baker: They respond to respect and kindness by making it their job to “get you”.

Valentina Prati: I love my Aby because she loves people, she’s athletic and she loves stay with me. I also love her purring so loudly

Koshka Hellqvist: Loyalty and attachment to their human(s). I say this a lot, but Abys are the oldest human-engineered cat breed (not based on a genetic mutation like Siamese, Manx, Persian, J-Bobs and other old breeds), and as such have lived in close proximity to humans longer than most other breeds, being more selectively bred for personality as well as physical traits. I think this makes them more perceptive to humans (more like dogs, which have been selectively bred for 12,000 years as opposed to 160 years). Anyway, that’s what I love about Abys, they are truly companion cats. I hope that made sense…

Cynthya Petzen: Their intelligence, curiousity, and how affectionate they are.

Emily Tester: I love that they are ultra playful, and incredibly affectionate.

Merry Merryfield: I have never had other cat breeds so I cannot compare. But are Abys truly different from say Orientals or Burmese or Ocicats?

Corrie Gold Wilder: Jumping on my shoulder, wrapping herself around my neck and purring!

Koshka Hellqvist: Merry Merryfield – I think they are. I’ve had mixed breeds, Siamese, Burmilla/Asians and Abys; the Abys are more “people-centric” than the others. Which is not to say that the other breeds don’t like people – they do! Our Asian (Burmilla variant) Tessie is a typical Burmese “velcro cat” and has to be around people…but when I point at something, she looks at my finger, not where I’m pointing. Jake and Angel look where I’m pointing. My Abys talk more than my Siamese did; it’s like they’re really trying to communicate. It’s hard to put into words what I’m trying to say, but…the Abys seem to understand humans…

Gilles Arthur Freund: They are foodies

Michelle Goulet Johnson: Head butts and push-faces and all the purrs and love.

Deborah Ann: Affection, intelligence, and the way they NEED their humans. Oh, and being greeted at the door when I get home from work.

Stephanie Eborall: Great affection, very intelligent, and the way they need THEIR humans on their terms. And their uniqueness – you know you have an Aby.

Laura Allen: My Abys have both been very in your face – and demand attention from humans, although Zina does not want to be picked up. I love how bold and curious they are. They are both beautiful and very cute – no matter how old, they are still kittenish and playful.

Lauren Young: All the chirps and trills when playing, cuddling & purring!

Myra Evans: One more. The vet has to open the door so Mac will stop purring so she can hear a heart beat.

Susanne Eisnor: They are such amazing friends in so many ways. Would never want to be without them.

Xuân-Mai Blais: well mine is not so bright, but the best hug machine ever <3

Julie Hanson: Our girl has an endearing habit of reaching up to touch you softly on the arm when she wants you to share your breakfast bacon or chicken. She knows exactly how to get your attention if you go upstairs and she wants you down. Maybe that affectionate nature has been too selectively bred into the Aby? Anyone agree?

Julie Hanson: I say this because she positively squirms with pleasure when you pick her up, turning her head sideways to head butt or push her wet nose into your face……haha, a little too overpowering sometimes, but we love her!

Tammy J. Banks: I have had many dearly loved cats in my life. But the Abys have been my soul-cats, my kindred spirits. Maybe it is, as Coco says, because they are such a very old breed. There’s something mystical about them. And I love their cougary quality.

Damien Spiccia: oh and constantly surprising! just when you think you have a handle on them……

Emilie Harvey: Perfection… And headbutts! Our girl is sooooo sweet!

Angela Sherzer: They are sooooo affectionate!

Vic Sapphire: all of them

Cindy Henn Tucci: The fact they are Abys!

Helen Warn: Um … did that answer your question? 😀

Josie Horne: I find that my Aby’s can be lunatics and it often appears as if they have no sense at all, but then I see the true nature come through when they work out complex puzzles I set for them or how to get to something they want that I have inadvertently shut away. Never underestimate your Aby’s, they have more intelligence in the tip of their tails than the majority of humans show in their lifetime. I think that it is in their character to make people believe they are silly or even stupid cats, but anyone who has them in their homes will always come to the same conclusion in the end, they are truly the most intelligent of mother natures creatures.

Roberta Morgan Wright: In your face cat 24/7! Love they want to everything with me.

Lauren Young: I can try getting work done….