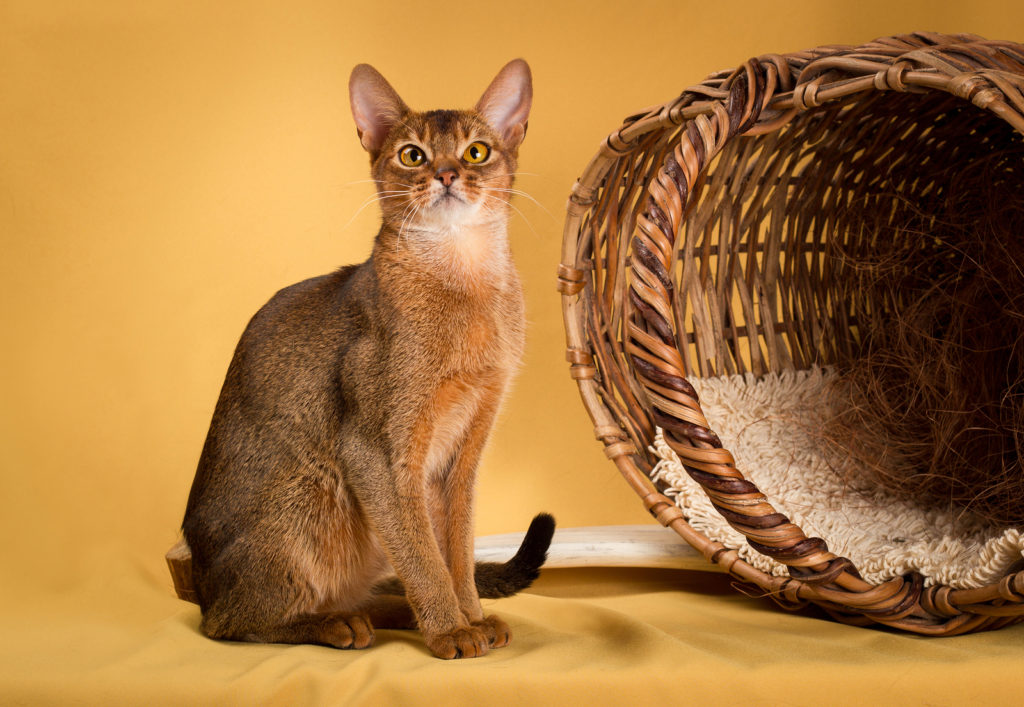 I’m curious about the personality of an Abyssinian cat? Is it playful? Energetic? Mischievous? Vocal? Affectionate? How do they differ, personality-wise, from a Burmese or a Burmilla?

Tracey Ann: Aby is all you have listed and more! They are so different compared to Burmese…who are gorgeous in their own right.

Jac Babush: Yes, Yes, Potentially, Depends on the Cat, EXTREMELY affectionate, and smarter than most people.

Jenni Mattila: Curious loves to help with whatever you are doing, always supervises and assists tradesmen. Needs lots of cuddles and attention forgives quickly usually good with dogs

Marie Pellegrino: Are they similar to a Siamese personality?

Jeanette Meech: Abyssinians don’t yowl but they do chat! Not as naughty as Burmese usually.

Jeanette Meech: Cindy Edmonds , very! One my mate had used to open the stable doors and let the horses out 😂

Carl Emmanuel: All of the above

Diane Bridges Wilson: Abys are thought of as the dog cat..their sense of smell is more acute, they can be taught to play fetch and other things quicky, they are of higher intelligence, they are like a guard dog without the bark, devoted to “their person”..not all are lap cats but those that aren’t will sit close, very regal and their meow is like a chime..different then any other breed.

Marie Pellegrino: Sounds similar to the Siamese. They fetch,athletic and dog-like, too. I love all those traits!!

Carl Emmanuel: I thought they were known as the clowns of the kitty world..

Geri Rebstock: Carl Emmanuel That, too.

Nola Higgs: Having had a Burmese, I found Abys like this:* They are FAR less noisy. I love their sweet little voices. * They climb a LOT. Go with the flow or you’ll go crazy. We built a high tunnel for them to go out across the verandah to a cage. They love it!* Mine cuddle less often – play comes first – but when they do it is just as sweet. My boy is a total lover. Ask a breeder’s recommendation on that. *Mine don’t chew things as much as my Burm did. My Burm was always bringing me little pieces of stuff she found. She chewed power cords and all manner of things. It could be rather stressful at times. In fact, that was what killed her. *I’d say my Burm was cheekier, but that doesn’t mean Abys aren’t playful or cheeky as well.* They are a whole different vibe, but very adorable in their own way. * Many take very well to a vest and lead for walks. * If you want a sheer love bundle velcro cat, go for a Burm. If you want a bit more adventurous but still very social cat, go Aby. Guys take well to both.

Cindy Edmonds: Did your Aby and Burmese get along well?

Nola Higgs: Cindy Edmonds Unfortunately my Burmese died early in May 3 years ago. I was shattered beyond all belief. There weren’t many Burm kitties around just then and I had my heart set on a brown girl. I was worried sick that if I got another chocolate, I woul…See more

Cindy Edmonds: Nola Higgs Such a sweet story! I do think they pick us!Thank you for your input- I do love the Burmese 😻

Nola Higgs: Cindy Edmonds yep..ltill bedtime, then he’s all over my husband, who dishes out the late night snacks. 😅😅😅

Diane Jones: I had a Burmese years ago. Her personality was the same as a Siamese. The Siamese is an old soul and a Velcro lap cat. It is extremely intelligent. The kittens instinctively know how to play fetch. They will follow you anywhere and get into everything. A Siamese is more likely to communicate complex ideas to you. An Aby is a young soul. It is bright and energetic and a clown. They will take apart everything and be into everything. They are obsessively loving, but not every minute, like a Siamese. They are more physically interactive. For example, they easily learn tricks and watch you and try to mimic what you are doing. Both cats are highly intelligent, but in different ways. Siamese are more nervous and are a one person cat. Abys love everyone and even like dogs. For maximum satisfaction, get one of each!

Juliette Mok: Interesting ! I have a tonkinese (siamese x burmese) and an abyssinian. And an old soul and young soul is a right description of them !! 😊

Linda Fox: My Burmese seemed more quirky than my Abys. My abys were more food-obsessed and more demanding of attention! My Burm maintained a random-seeming hoard under my guest room bed … and was obsessed with the vacuum cleaner — not fearful, obsessed!

J-f Bernard: Well I got 5 and they pretty much all different. One is the alpha control freak(smallest female), 2 are anxious, 1 doesn’t give a damn about anything. And the young one is extremely vocal. playful, energetic and get on the nerves of the others and 3 of them like to play fetch with a toy like a dog. 2 of them are extremely jealous. Well they are special cats maybe not for everyone but I love them all.

Jennifer Najak: I have never met a vocal aby. My first any was super chill. My current little lady has to put up with two young children, so she is a bit high strung around them. But she still wants to be around humans mostly all the time. And is highly tolerant

Javiera Paz: I have 6…. between 1 to years, all palyful, never vocal, very curious, half very affectionate and other half just affectionate, energetic. Never shy, they are very friendly with strange people. All of them follow me when I walk, go with me to cook, to shower… they help in everything!

Richard Eisen: Make sure that there are no toxins or other stuff they can chew that can damage their innards in this cabinets and drawers. They may not like having pills shoved down their throats but that won’t stop them from taking one while playing with them.

Javiera Paz: Yes, I know… they open the drawers with small cloth, and stolen socks for play